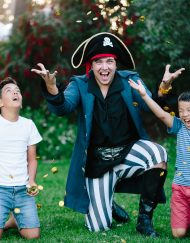 What is a Pirate Party?

Ahoy there me Matey’s! Looking for something versatile? Our Pirate Party Entertainment has you covered!

Join us as we round up the crew and go on a Pirate Party adventure to find the treasure of Forbidden Island. You’ll need to face many difficult challenges to learn the ways of a pirate! Walk the Plank, Solve the Treasure Hunt Clues and make sure you follow Captain’s orders! Don’t forget yer parrots!

What Pirate Party Games Are Played?

There are plenty of interactive pirate party games included for lots of swashbuckling fun! Follow the clues to reach the hidden treasure, steal the keys from the captain, but don’t get caught, or you’ll have to walk the dreaded plank!

Girls love being pirates or you could mix this theme with Fairy, Mermaid or Princess.

Who Does This Party Suit?

The Pirate Party entertainment is very versatile and accessible for most ages! We are able to customize our entertainment to suit your group and event.

Pirate games and activities, customised to suit the age group and preferences of the participating children, as well as the space available.
Pirate invitations included.
Prizes included for all games. Children who win a prize have the opportunity to select their own prize.
Sound system with pirate songs

2 entertainers from $335 (recommended for up to 25 children) 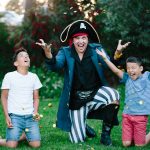 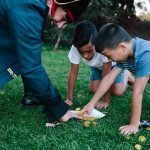 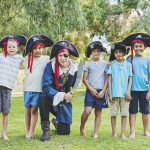 Pirate Caleb was a Hit!

The party was fabulous and that was mainly due to your entertainer (Captain Caleb)! He had a beautiful manner with the children and was courteous and thoughtful towards the adult guests. My experience of using your service was a positive one and I would be happy to recommend your services amongst my networks.

What are you looking for?