Ahhh, superheroes! The heroic, lycra clad crime fighters that are idolized and adored the world over. So much so that their legacies and stories can be traced back to as early as 1917! It’s fair to say that many of the classic caped crusaders have dominated the mainstream media of modern times, starting with printed comic strips in the 1930s to the multi million dollar movie franchises we know and love today. With such following and renown, it’s no wonder that superheroes such as Superman, Batman and the Ninja Turtles are still major hits today and have transgressed generation upon generation.
It’s no wonder then that superhero parties are one of the most coveted themes amongst the cool kids on the block. But hosting a party in this day and age is not nearly easy as it was in the ‘30s, even though the superheroes are the same! With so many ready made costumes, accessories and services about, there is more and more pressure to make your kid’s party the one of the century… well until next year at least. A quick peruse of the internet provides no respite either. With so many websites offering thousands upon thousands of ideas, from the food to the cake to the deco 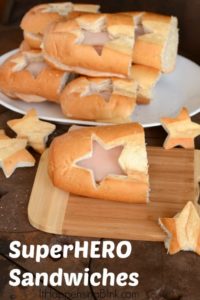 r; it’s hard to determine where to start!
To make things a little easier, I’ve compiled my four favourite DIY ideas from across the World Wide Web that will be sure to give your party that extra ‘POW’ or ‘KABLAM’. Not to mention they’re great activities to get them involved which will definitely make it a party to remember.

1. One thing you won’t want to deal with on the day are hangry little superheroes. Although brightly coloured lollies and cordial lend themselves well to such a colourful and exciting theme, it’s also nice to have more substantial offers on the table. Melanie has the right idea over at It Happens in a Blink with her Captain America inspired sandwiches! You can use whatever healthy fillings you want and create these bad boys with simply a star shaped cookie cutter, the effect is amazing! 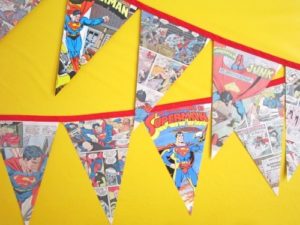 all about strong primary colours, which is convenient because they work great as a colour scheme for decorations! A bright red or yellow table cloth is an easy way to decorate the table, with maybe bright blue plates or napkins to compliment this. A really awesome way of jazzing up any area and really driving home the superhero theme is homemade comic book buntings! Jennifer over at Blissful Nest has a comprehensive tutorial on how you can easily make these awesome decorations! 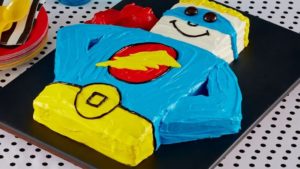 3. What’s a birthday party without a cake?! Baking is a great way to interact with your child and a great educational opportunity for them. Betty Crocker (the culinary goddess that she is) has come to the rescue again with a fantastic yet simple recipe for a super cake! The kids will have a blast customising their cake with decorations
and turning themselves into an edible superhero!

4. The last thing yo 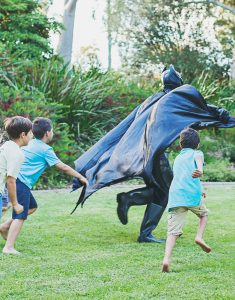 u’ll want to make sure you cover for a super hero party are the games! Now, entertaining a group of sugar hyped kids for a few hours is no mean feat. Let them have a chance to run off some of the energy with a twist on the beloved Scarecrow game. Many children are familiar with the rules from physical education at school. If you are tagged by the person who is ‘it’ you have to freeze until someone crawls between your legs. To give it a more sinister spin- explain that the ‘it’ person is a villain with an evil power. Perhaps that they turn superheroes into toilets, or something equally crazy! Then the other children must ‘free’ them by sitting on them and flushing the toilet. It’ll have both parents and kids giggling and having a great time. This and other sensational games are provided by Parties Kids remember, who have professional and energetic hosts who will keep your kids entertained for hours! All are cleared with up to date Working With Children Checks and have extensive training. Check them out!

I believe it’s important to include your child in planning and creating their vision for their party; it’s fun, educational and gives them a great sense of accomplishment and pride. With these simple ideas, you’ll be sure to have an easy, affordable and SUPER party!

Have a magical day!

...This is our second party with Parties Kids Remember and I highly recommend them as our host highly entertained the kids (both girls and boys) for two hours! ...The kids had a ball and danced the night away. Thanks so much, we'll be sure to use you again! -- Kym Collins

Our talented performers have current working with children's card and bring the fun to you creating magical memories for parents and children alike!

"We had a spiderman balloon twisting party for my sons 5th birthday party. I would highly recommend Parties Kids Remember to anyone and I will have them again! My son had the best birthday he will never forget. All the kids had so much fun."

Share on FacebookShare on TwitterShare on Linked InShare by Email